The Art of Democracy 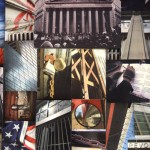 Curator Anne Strauss made all the right choices when she picked the works for this show. Some of the pieces included will not only surprise and delight you but also challenge your very notions of what democracy is and how it works in this country or even in this neighborhood. Strauss has sectioned the works off by themes: there is the wall of war, a section for Black Lives Matter, the history of democracy starting with the Greeks, the celebration of America wall, and a section of pieces making dark fun of the whole political process—and these are just some of the themes in the show.

Strauss’s first pick that greets you on the left as you enter the gallery may seem to be an odd choice. It is an abstract expressionist piece by Bryan Greene, Untitled #1. The swirl of geometric but organic shapes and the vivid colors will make this an easy favorite for most people but may leave them wondering what it has to do with democracy. However, Greene is a clever representationalist even in the abstract because the colors represent the ethnic and LGBT communities within Hell’s Kitchen and the shapes are the interactions between these multitudes of people. And, indeed, is that not what America is after all, swirls of exchange between cultures, the famous melting pot? This piece is bright and offsets some of the darker tones that the other works show by dealing with the often-negative side of the political process.

The next artwork marks the first time that artist Gavin Jones has been in a Fountain House Gallery show and his debut is strong. His work Listen to the Poor is a graffiti piece and he has signed it with his moniker “Dubblex.” It is not just the message sprayed across the canvas that is forceful—it is the tagging itself, from which you can tell that Dubblex is an artist worthy of a large scale throw-up on the now defunct graffiti heaven warehouse in Brooklyn called 5 Points. Dubblex actively engages in a unique calligraphy on his canvas—he creates a typeface somewhere between cuneiform and hieroglyphs.

Artist Susan Baus’s compelling Balance of Power, depicting two cats inside facing two dogs outside, is particularly arresting for its commentary on how our government works. Probably the most bizarre and interesting artworks from the show are by artist Angela Rogers. Her figures of aliens are rich with symbolism. U.S. Gov – Secrets portrays a hovering spacecraft with a row of aliens in the foreground. The aliens are presented as if they are in a lineup—a lineup for what is not certain. One would think that Rogers is a conspiracy theorist from the painting but according to a source at the gallery what Rogers is really trying to express with her depictions of aliens is the status and treatment of immigrants by our government.

But of all the artists in the show, Boo Lynn Walsh’s work is the most powerful. Walsh’s pieces range from the confrontational to the satirical without losing their relevance or edge. Her two mixed media pieces, The True Administration of Justice is the Firmest Pillar of Good Government and I Have a Dream, feature a collage of her own striking photos of protests and protesters and even spent bullet casings (not photos of casings but the real things). Both pieces are small and placed on wooden blocks of varying widths making some photos stick out farther than others, which invites the viewer in for a closer look at these “iconic” pictures that she has taken over the years while at various protests.

Boo Lynn Walsh, I Have a Dream

By far, her most exciting piece is her satirical take on the voting process Con-FU-Zion 20/20. She has fashioned her own “computerized voting machine” and it is interactive, so you are supposed to actually vote with it. Various instructions and explanations of what exactly you are voting for are placed on the “machine” for you to read and then vote. A milk jug of “voting spheres” (ping-pong balls) sits beside the machine for you to vote with. You take a ball and place it into one of two cup-tubes for either “yes” or “no.” But being the satirical piece that it is, the voting is rigged and your ball will only go to one of the choices, which you will have to find out yourself by going to the show. The commentary does not end there because Walsh has placed a Diebold Election Systems sticker on the piece as if it is one of their machines. Diebold is a huge conglomerate that decided to get into the electronic voting machine business during the early 2000s. Their product was plagued with problems from the start; anyone could tamper very easily with the machines and skew the outcome of the race for an individual machine. For a while, Diebold cornered the market on electronic voting until the controversies forced them to sell off that part of their business in 2008. Unfortunately, the problems have not ended with Diebold and now other companies’ whole systems, not just individual machines, are vulnerable to tampering.

The aforementioned artists’ works are just a sampling of what awaits you at this show and it is not to be missed.