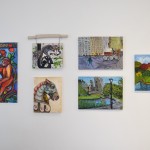 June 7th was “event night” at Fountain House Gallery and Fountain House. On this balmy, breezy evening, the group exhibition Oasis: Exploring Central Parkopened at the Gallery, preceded by the annual “Summer in the Garden” event at Fountain House. The Gallery’s Thursday-night opening receptions are customarily held from 6 to 8 pm, but on this night the reception was extended to 9 pm, allowing friends and supporters time to avail themselves of a Fountain House doubleheader.

Oasis curator Robin Cembalest was in attendance at the opening. Robin is the founder of Robin Cembalest Editorial Strategies and is the former editor of ARTnews. She said about the show, “The different ways in which these artists use their work to explore Central Park is fascinating. In painting, textiles, collage, and more, they employ distinct ways of conveying the magic of the park, whether through shimmering reflections of the lake and ponds or the brilliant fall leaves that are seen in multiple works. The natural and manmade forms found in the park take on distinctive personalities—the trees and bridges that are repeat characters in the show are animated and affectionately portrayed. Throughout, we never lose sight that surrounding this urban oasis is a bustling city."

Central Park is the most visited urban park in the United States, and one of the most filmed locations in the world. The park was established in 1857 on 778 acres of land acquired by the city. In 1858, landscape architect Frederick Law Olmsted and architect/landscape designer Calvert Vaux won a design competition to improve and expand the park. Construction began the same year, and the park's first area was opened to the public in the winter of 1858. Construction north of the park continued during the Civil War in the 1860s, and the park was expanded to its current size in 1873. After a period of decline in the early 20th century, Robert Moses started a program to clean up Central Park. Another decline in the late 20th century spurred the creation of the Central Park Conservancy in 1980, which refurbished many parts of the park during the 1980s and 1990s.

The exhibition showcases more than 40 works in a variety of mediums. The Oasis artists are: