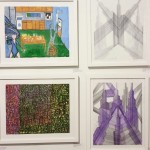 Fountain House Gallery has participated in the annual Outsider Art Fair for more than a decade, and we continued the tradition at this year’s Fair, which took place January 17-20 at the Metropolitan Pavilion on West 18th Street. We look forward each year to this prestigious international art event, which provides an opportunity to present Gallery artists’ work on a world stage.

Jorge Pablo Hernández incorporates elements of architecture, engineering, and chemistry in his linear/geometric artworks, many of which express his vision of New York City. Roger Jones also is inspired to create works featuring NYC-related scenes and people, made in acrylic, marker, and colored pencil. Mercedes Kelly’s playful, small-scale “dog portraits” spotlight a multitude of canines and convey their distinctive personalities.

Angela Rogers’s “Poppets” (an Old English spelling of the word “puppets”) are sculptural assemblages combining wire, yarn and fabric with amulets, charms and talismans, endowing each piece with an aura of mystery and magically-charged power. Alyson Vega employs various techniques in her fiber art pieces, incorporating all types of fiber and found objects to express the beauty and order she perceives in a chaotic world. Laura Anne Walker, who works in ink and graphite, refers to the cats who have graced her life as “my muses” and customarily tucksat least one image of a feline into each of her intricate, multi-hued works.

Angela Rogers and her "Poppets"

What is “Outsider Art”? In the 1940s, the French artist and curator Jean Dubuffet coined the term Art Brut (“Raw Art”) to describe “works produced by persons unscathed by artistic culture, where mimicry plays little or no part (contrary to the activities of intellectuals). These artists derive everything...from their own depths, and not from the conventions of classical or fashionable art." The English art critic Roger Cardinal, a champion of Art Brut, called it “Outsider Art” in his 1972 book on the genre. The term stuck.

We met new acquaintances at the Fair and welcomed friends and supporters of long standing, among them Agnes Gund, President Emerita of the Museum of Modern Art and member of the Fountain House Gallery Art Advisory Council. “Aggie,” as she is affectionately known, has acquired a number of pieces by our artists and curated an exhibition at the Gallery. Jerry Saltz, Pulitzer Prize winner and Senior Art Critic of New York magazine, stopped by; Jerry served as emcee of the Gallery’s Mad About Art event last November.

First-time Fountain House Gallery buyers and repeat customers alike departed the Fair with works by our artists. Gratifying sales, viewing wondrous art, and getting to know art professionals from around the globe made this Outsider Art Fair adventure a success.